Colourful, marbled hard-boiled eggs that can also be stuffed with your favourite stuffing.  Ideal to entertain kids and also as a pretty appetizer on Easter Day or on any other occasion!

I know that there are many versions of these found on the web but it’s been a while since I wished to try this experiment and give it a go!  I love everything that’s stained glass or marble so maybe that’s why these are so appealing to my eyes, apart from my arty side!  So here goes!

For this experiment I only used 4 eggs but any amount can be used according to how many you’d wish to have.

The trickiest part for me was peeling the eggs, as they were freshly bought, hence making it more difficult to remove the shell pieces, which tend to remain stuck without making an indentation when trying to remove them!  The green one at the top right of my picture is a perfect example of a stubborn egg!  This notwithstanding, I was very pleased with my first attempt! 🙂

Food colouring (I used the paste version in this one)

Containers to dye the eggs in

Put the eggs in a pan large enough to hold them all and to cover them completely with cold water.  Bring to a rolling boil whilst leaving the pan uncovered, cover the pan and turn off the heat.  Leave in the covered pan for around 17 minutes and not less.  Rinse immediately under cold water until good to handle. 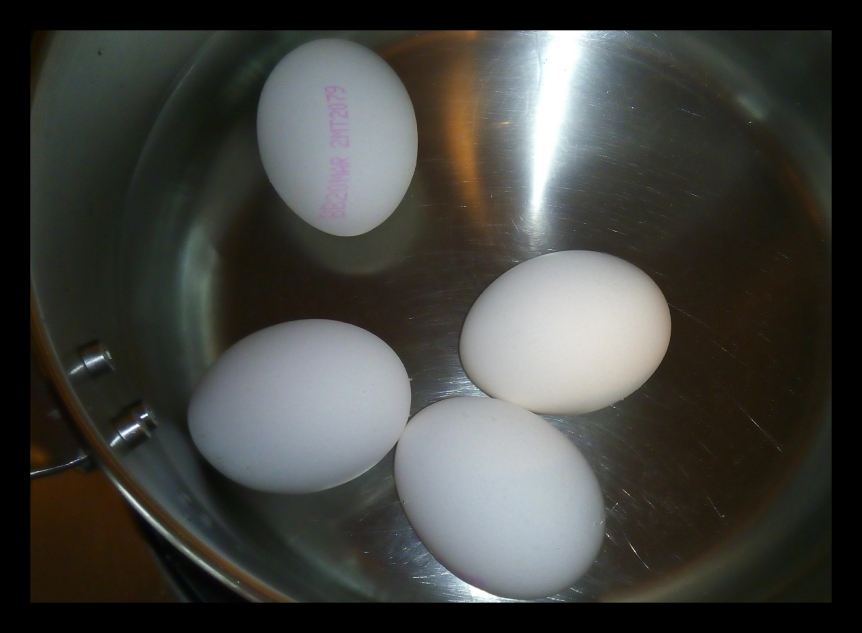 Tap the eggs gently on your work surface to form cracks all around, paying a bit of attention not to have any shell pieces fall off as much as possible.  Don’t worry if there’d be some tiny bits (as shown in the picture below) … they’d add to the feature … but it’s better to avoid big, empty spots, which would then result in large blobs of colour after tinting.

Fill a number of containers, according to how many colours you would like to have, with water, enough to cover the eggs completely.  Drop small amounts of food colouring until your desired colour tone is reached … the darkest the better but then not that dark that it resembles black!

For mine I used a dark tone of green and red and two large, glass jars.  But bowls, or any other suitable container whatsoever, could be used.

Immerse the eggs gently in the containers (using a tablespoon to slide them in would be of much help) and leave to soak in the colour for 30 minutes.  Rinse the eggs well under running water.

Carefully, remove the shell, hopefully not having those kind of eggs at hand that would give you a hard time like the ones I had, and voilà!

Now, you can either leave them whole or cut in half, scoop the yolks and fill them with your favourite stuffing! 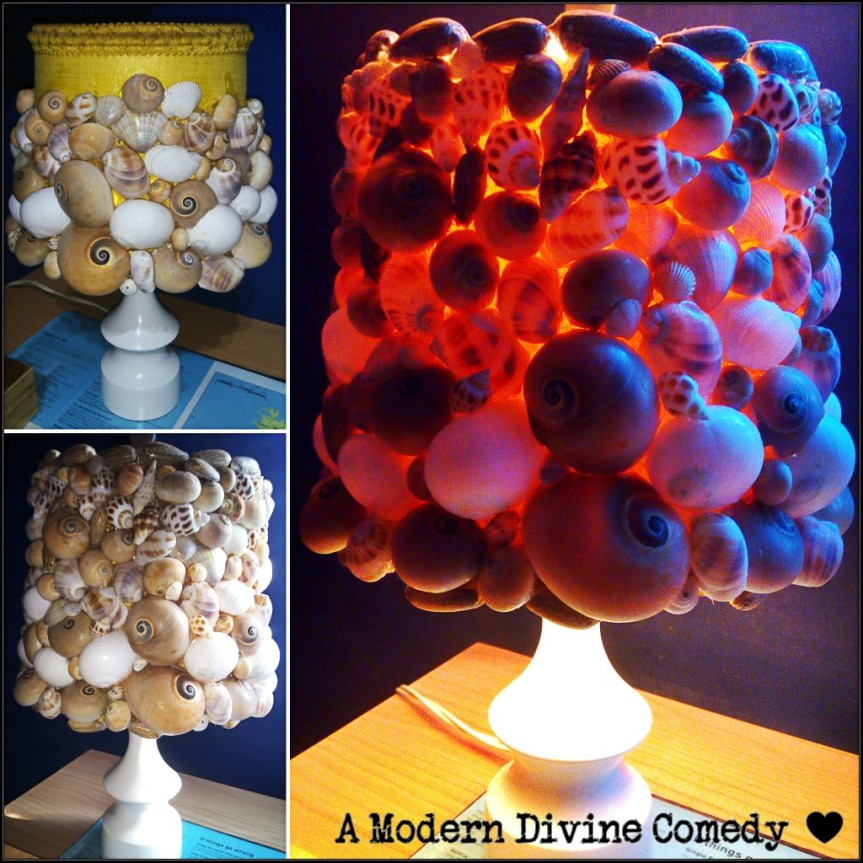 At last!  It’s done!  Seven and a half hours in total, spread over two days, to end up with this lampshade for my son’s bedroom, which we’re filling up little by little trying to stick with the nautical theme!

We did look around for ready-made ones in stores but nothing actually matched up to my son’s liking!  So, having had an old lampshade hidden away and always waiting for me to liven it up, and after enjoying collecting and buying a few packets of seashells … voilà!  Some silicone glue (which also acted as a good filler for the cavities of the shells) and painstaking patience, plus a bit of precision, and we ended up with what we wanted at only a fraction of the price of what it might have originally cost us!  And, it’s custom made!  Of course, you have to be some kind of a masochist like me to spend all those hours trying to stick different shapes of seashells in at the right angles, but can we really say “no” to our children!?  With the right motivation, and those extra pairs of helping hands, it could be done!

Novelty Cakes I did in the past

An Independent Non-Discriminatory Platform With No Religious, Political, Financial, or Social Affiliations

Something to ponder upon

Eating Healthy, Traveling Far, and Adding Lemon to my Water

Dear reader, I have bled every single emotion and I have tried my best to put them in these pages. I will write until you run out of tears to find in these words. Tears that are products of every dote you lost, products of so much affliction that they never had enough strength left to carve their path tracing down your cheeks. And I will be honest with you to say that I am not there with you. Truth be told, I am mostly not in these writings. In fact, I have never been in any real relationship that I wander at the thought of whether I have any right to write about these things. But I am a wallflower, in the eighteen years that I have lived I have seen the people around me break so hard that they crumble back to their cradle. Love is a different kind of war but as long as I am standing I will give a hand to those who have fallen. These writings are not about me, despite most being written in first person. I want you to find yourself in them. I want you to find yourself and get yourself back.

Cornwall Photographic
Blessed with a Star on the Forehead

As I navigate through this life ...

Words Are All I Have site

Poetry and short stories. With few daily quotes here and there!

Written from the heart, this is the unadulterated truth of life with multiple chronic illnesses and being housebound. My life open for you to follow. Please join me

Be Free Be You

Seeds4Life
A directory of wonderful things

I want to sing like the birds sing, not worrying about who hears or what they think.

WITHIN ARE PIECES OF ME

From a girl who lost her mind

................... for lovers of ice cream. Your free on line magazine for sweet frozen treats. Recipes, inspiration, artisanal ideas for your delectation.

O at the Edges

Musings on poetry, language, perception, numbers, food, and anything else that slips through the cracks.

Smile! You’re at the best WordPress.com site ever

When life keeps dragging us from Hell to Purgatory, and then to Paradise and back again, let's try to make it easier!

A daily selection of the best content published on WordPress, collected for you by humans who love to read.

The Art and Craft of Blogging

The latest news on WordPress.com and the WordPress community.